Through the FMS, pilots can input data to manage the automation of the aircraft. For example performance data, route planning, and descent profiles. These are just a few essential parts of the flight phases that pilots program and manage using the FMS. Linked to other computers like for example the autopilot and auto-thrust, the FMS flies the airplane according to the routes, profiles and performance programmed by the pilot.

What is an FMS trainer? 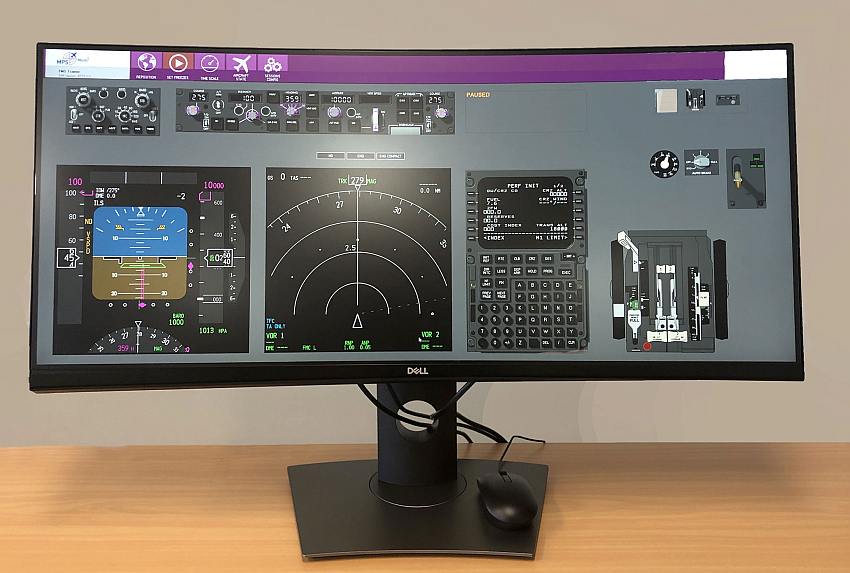 The role of an FMS Trainer

As a standalone training device, the FMS can be a much more cost-effective way to train pilots than a Flight Simulator. Next to that, it also allows pilots to focus on one important aspect of the aircraft.

MPS has developed a fully functioning stand-alone FMS (Flight Management System) trainer for all levels of pilot training. The MPS FMS trainer is a complete system with hardware and software. It operates as a standalone FMS linked to a desktop for free-play and full functionality.

Types of pilot training an FMS trainer is used for

An FMS trainer’s main use is for the initial part of Type Rating. As a standalone device, it’s easy to train and practice programming of the FMS and its interaction with the aircraft’s automation. The big advantage of this is that it doesn’t use valuable flight simulator time.

The FMS trainer fits into the MPL program extremely well, because it gives pilot candidates a better understanding of their capabilities. Next to that, the trainer can help deepen a pilot’s knowledge of how the FMS works together with the automation of the aircraft. The FMS trainer is also an invaluable training tool for Type Rating.

What an FMS looks like in an aircraft cockpit

Depending on the aircraft type, there are usually two FMS’s fitted. In such setup, one FMS acts as a Master and the other as a Slave. The Control Display Unit (CDU) is the actual hardware visible in the cockpit and consists of an alphanumeric keyboard and display. There could be two or three CDUs fitted in the cockpit. One for each pilot side and a third CDU mostly used to control or access other systems.

FMS training usually focuses on setting up the FMS before the flight. For instance, programming the flight from departure to destination according to a (printed) flight plan, then entering departure routing and weather data, weights etcetera. The training then typically continues by simulating a flight from the departure airport to the destination airport, with various training events added (for instance programming runway changes, re-routings, weather deviation, programming holdings, diversion to alternate airports, and so on).

The difference between an FMS and MCDU

The Multi-function Control Display Unit (MCDU) is the interface between the pilot and the FMS computer. The MCDU usually has an alphanumeric keyboard and a display. Normally the MCDU also interfaces with other aircraft systems, like aircraft maintenance systems, or for communication with air traffic control.

The philosophy of different aircraft manufacturers may vary slightly, but they all follow the same principles in guiding the aircraft from departure to destination, using an aircraft and engine performance database and a navigation database containing routing information.

FMS training when an FMS trainer is not available

If there is no FMS trainer for pilots, training usually takes place in either a fixed base simulator or a full flight simulator. Alternatively, pilots use a computer based cockpit systems trainer, which usually has multiple large touch-screens that simulate an entire cockpit. This works well, but as a standalone training device, the FMS can be a much more cost-effective way to train pilots than a Flight Simulator. It also allows pilots to focus on one important aspect of the aircraft.

The size of an FMS

Space, weight and size are at a premium in aviation. That’s why an FMS keyboard and display are relatively small compared to, for example, modern cars. Also, aircraft like the A320 and B737 were certified more than 25 years ago, when computers and displays were much slower and smaller, and things like touch-screens didn’t exist. Updating this and re-certifying for aviation authorities would be very expensive. The latest models aircraft (like A350 and B787) do indeed have larger displays and devices like trackballs.

Practical usage example of an FMS, as pilots use it on a flight deck

Typically, a pilot first checks if the FMS navigation database is up to date. This database contains all relevant information about airports, departure and arrival routings, airways and navigational aids in the airline network. Because this information changes regularly, it is vital that the FMS uses a current database (regularly uploaded by maintenance staff). Then there’s also a fixed database, which contains aerodynamic and performance data about the aircraft and its engines.

Next, pilots define the route they intend to fly, either manually or from an airline defined database. After that, they can enter the expected runway and routing for the departure and destination airports.

Finally, the aircraft weight data is entered, and take off performance data is calculated and entered.

This entire process can be done in about 10 minutes or less, after some practice.

The benefits of FMS training

Using an FMS is not difficult. It just requires understanding of the principles, and practical training for its use (remember a picture is worth a thousand words). There is usually a specific way an FMS needs to be programmed before and during each flight, and the training program teaches and explains the correct sequence of events.

The role of the FMS during an emergency

In an emergency (for example an engine fire) the most important thing is to fly the aircraft according to the old principle “aviate, navigate, communicate”. This does not generally require action on the FMS. After the emergency has been dealt with (and say, the engine has been shut down) a diversion or a return to the departure airport may be required. After training it’s easy to program a return to the departure airport, or find out where the nearest airports are and program a diversion into the FMS.

For more information about FMS trainers, please get in touch. We’ll be happy to assist you.